Diana Damrau as Queen of the Night

Aged nine, Lang Lang, the virtuoso Chinese pianist, was told by his ambitious father to kill himself after his teacher 'fired' him for having no talent. He tells Rosanna Greenstreet about the extreme pressure put on him to succeed 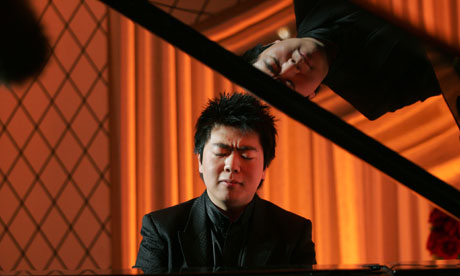 ... Lang Lang's father does not understand English, but in the past, he has spoken about the way he pushed his son. He said: "The way I see it is, pressure always turns into motivation. Lang Lang is well aware that if he fails to be outstanding at playing the piano, he has nothing."

Lang Lang disagrees. "I think that attitude is wrong because there are a lot of things you can do in the world," he says. "When I was nine, I didn't like my father. I knew he had dedicated his life to me, but I thought it was too much. I found the pressure unnecessary because I was a workaholic from the very beginning. I could understand if I was lazy and didn't care, but I didn't need that kind of push, because I knew what I wanted."
...

Lang Lang says: "When we came to America, my father could see that the American system was much more relaxed. At that time he said he still believed in the Chinese way. But as we met different musicians from different countries, his opinion changed. He is 58 now and his personality has totally changed, he doesn't push me any more. When I turned 22, he let go."

Asked whether his father feels bad about the way he hot-housed his only son, Lang Lang replies: "I think he does. When journalists ask him about it, he starts to cry."

Read Entire Article Here
at 12:00 AM No comments:

Most Popular Classical Requests by Teens:

3. Hans Zimmer - Pirates of the Caribbean

4. Saint-Saens - Carnival of the Animals

"Getting children listening to film sound tracks or more accessible classical music is a great way to introduce them to the more complicated works.” - Richard Alleyne
at 12:00 AM No comments:


Classical music megastar Lang Lang has been given an honorary doctorate in music by Prince Charles at a ceremony in London.

( Arthur Edwards, Pool / Associated Press ) - Britain’s Prince Charles, left, talks to pianist Lang Lang during a visit to the Royal College of Music, in London Thursday May 12, 2011, where he attended the college’s annual awards ceremony and presented awards to outstanding musicians including Lang Lang .
at 12:00 AM No comments:

Email ThisBlogThis!Share to TwitterShare to FacebookShare to Pinterest
Labels: Lang Lang, Music News
"To me, a musical piece is like the chapel, each tiny part of it tells something differently valuable,"

Why The Arts Will Survive

The recent news of the Philadelphia Orchestra's declaration of bankruptcy sent shock waves through the global artistic world. How could this happen to such a celebrated and renowned, top notch, international classical organization? I am not about to go into all the reasons for this action: economic, social, or otherwise, but I will go out on a limb and say it is my belief that the orchestra will survive this and the Arts in general will not only survive but once again thrive in the not so distant future.

When things gets tough, we often resort to tunnel vision and tend to live only in the present, forgetting about the past and the future. The Arts have always survived: even through the Civil War, the Great Depression, World Wars I and II, the turbulent 1960s, and the recessions of the early 1980s and '90s.

Art stands alone on its own merit. The personal conditions that each master composer went through during his of her lifetime are often irrelevant today. Does anyone know or even care that Ludwig van Beethoven never married or that he went deaf? What we remember and revere are his Symphonies. "A thing of beauty is an Ode to Joy forever."

When Igor Stravinsky's ballet "Rite of Spring" premiered in Paris in 1913, it was panned by the critics and created riots in the theater, but do these events change the overall impact of this sublime piece of music? To me, it showed how powerfully moving and primal this work is that people were shaken to their cores. It was a masterpiece ahead of its time and is now considered a seminal 20th century composition.

Past great composers, authors, photographers, and painters often produced their works not just for money or fame, but for art's sake alone. True art is an expression of the soul. It is timeless. It is sacred and speaks through its creators.

I will never forget a concert I was a part of in 2001. A young piano student from the Curtis Institute (Philadelphia, PA) was a guest soloist with the Lehigh Valley Orchestra (conducted by Donald Spieth) of which I played in the French horn section in Allentown, PA. This pianist performed Chopin's Piano Concerto No. 1 in a way that moved all who were within hearing distance. One trumpeter suggested the soloist had made a pact with the devil. Another musician felt he was channeling some spirit from the Great Beyond when he performed. My father, who was in the audience, told me later that during the Chopin piece he thought about his mother (whom he had never met because she died giving birth to him.)

That experience showed to me the power of art. It can touch us deeply to the core of our souls. This was an example of an artistic event that transcends time and space. The soloist was Lang Lang and he is still enthralling audiences to this day. Sadly, the Lehigh Valley Chamber Orchestra folded in 2007 from lack of financial support. Times are still tough right now for freelance musicians.

What we must remember is that for an artist to reach the height of transcending that Lang Lang achieved, there are many factors involved including lessons, discipline, and practice. In today's high speed technological world, we have come to expect instant gratification and have often lost the patience it takes to develop excellence. Many in today's younger generation have yet to cultivate an appreciation for the fine arts and unfortunately most public schools are not doing their part to educate them.

But I still have high hopes for the Arts to make a comeback. Look at the success of professional sports in this country. Sports exemplify the traits of hard work and training and I believe are simply another form of art. We need to accentuate the commonalities between the two disciplines. Olympic events such as Figure Skating and Gymnastics blend both athleticism and grace.

One advantage of this cyber age is that we now have at our fingertips the ability to view past sporting and artistic moments of beauty frozen in time through Google and youtube. In baseball we have "The Catch"; in football, the "Immaculate Reception"; in track, "The Race"; in boxing, "The Knockout"; in basketball, the "100 point game"; in ice hockey, the "5 goal game"; and in tennis, the "Battle of the Sexes." Art in sports is sublime.

In entertainment, we have Judy Garland singing "Over the Rainbow", Elvis performing on Ed Sullivan, the "Meet the Beatles" album, Frank Sinatra crooning in Vegas, Fred Astaire and Ginger Rogers dancing, and countless other classic memorable moments. Art is entrancing.

In Classical music, one of my favorite videos is of Leopold Stokowski conducting Debussy's "Prelude to the Afternoon of a Faun" in 1972 with the London Symphony on his 90th birthday. Art is ageless.

In ballet, I love watching Mikhail Baryshnikov soar in clips from the 1977 film "The Turning Point". Art is graceful and beautiful.

There are infinite amounts of examples of great art online that stand the test of time from films to songs to dance routines to sports miracles to paintings. No matter the circumstances, the budget deficits, the impatience, the present miseries, art will find a way to be heard, seen, or felt.

Creativity will never die and composers, writers, performers, painters, photographers, and athletes are all channels for art to live through. It is up to all of us to support blossoming young artists and help provide the education and inspiration they will need to express their skills.

If we follow our higher instincts, art can do more than just survive, it will thrive because "A thing of beauty is a joy forever."
at 12:00 AM No comments:


2CELLOS are Luka Sulic and Stjepan Hauser. With over 5 million hits on YouTube, their passionate, dueling cellos version of Michael Jackson's "Smooth Criminal" has taken the world by storm.