There's a tendency to think that African-American contributions to music lie pretty much in the fields of jazz, blues, spirituals and other so-called popular art forms.

African-American contributions to classical music are acknowledged to a degree in music textbooks - when it comes to figures such as William Grant Still and Coleridge Taylor.

Before the Civil War, legions of free African-Americans, who also happened to be composers, left the United States for Europe - especially France, where they began to produce a large body of fascinating classical music, most of which has gone unacknowledged and unperformed in any major way. They include figures such as Edmond Dede (1827-1901), a New Orleans-born Creole and child-prodigy who was forced to flee to Mexico because of white hostility.He eventually returned, working as a cigar maker and eventually saving enough money to continue his studies in Belgium and Paris. Nevertheless, these composers exerted a big influence on the countries they adopted.

Decades after the Civil War and into the 20th century, industrialization lured many African-Americans to northern cities in quest of work.

One of this migration's greatest cultural creations was jazz and blues. But what's l

ess known is that classical music resulted as well - song cycles such as "Out of the South" by Florence Beatrice Price (1887-1953), which sets to music poetry by Harlem Renaissance writers such as Langston Hughes and Paul Lawrence Dunbar. Price, by the way, also wrote for orchestras. In fact, she's the first black woman in the United States to win recognition as a symphonic composer, according to George Stelluto, the Peoria Symphony Orchestra's music director.

"It's a really interesting aspect of American music history that we just don't pay attention to," Stelluto said.

Gary Panetta is the fine arts columnist and a critic for the Journal Star. He also has a blog, Bach and Lemon Shakeups, at pjstar.com. Panetta can be reached at 686-3132 or gpanetta@pjstar.com.

MENDELSSOHN swore off them permanently. Debussy called them “a purely arbitrary affair.” Bartok said they were for horses, not musicians. The charges against classical music competitions are familiar: art is not a sport; the need for jury consensus rewards conformism; fear of losing stifles innovation; actual losing can cripple morale and, potentially, a career. 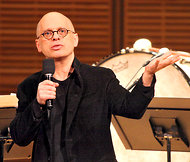 But several new endeavors challenge these complaints by tweaking the competition concept and using the Internet to create an open dialogue among composers, performers and the public.

On Nov. 15 the violinist Hilary Hahn announced the Hilary Hahn Encore Contest in a YouTube video. Until mid-March anyone may submit a short piece for violin and piano, and Ms. Hahn will perform and record the winner alongside 26 other encores she has already commissioned. Contestants enter by uploading a PDF of a score and a MIDI sound file to Ms. Hahn’s Web site (hilaryhahn.com).

The same day the composer David Lang, a co-founder of Bang on a Can and a Pulitzer Prize winner, announced a similarly crowd-sourced competition. In conjunction with a new CD of Mr. Lang’s piano works, entrants could download a free score of his short piece “wed” and post their own performances on YouTube until Dec. 31. The winner will be flown to New York to play in a concert of Mr. Lang’s music at Le Poisson Rouge in May. Can you make out to Mozart, or shack up to Chopin? Composers can turn on the sex appeal when necessary.

With Valentine's Day around the corner, my mind keeps coming back to two things. One of them is music.

The other? Well, I've often wondered why we find plenty of sex in almost all the fine arts — literature, movies, painting, sculpture, opera — but not in the classical concert hall.

It's not easy to depict even a simple kiss in something as amorphous as music, but that doesn't mean composers throughout history haven't tried.Here are five examples of some really steamy classical music
at 12:00 AM No comments:

baroque.me visualizes the first Prelude from Bach's Cello Suites. Using the math behind string length and pitch, it came from a simple idea: what if all the notes were drawn as strings? Instead of a stream of classical notation on a page, this interactive project highlights the music's underlying structure and subtle shifts.

Can Asians Save Classical Music?

Orchestras (and audiences) get more Asian-American every year. Will it be enough?

What do symphony orchestras and cigarette companies have in common? It’s the age problem. How do you stay in business when your customers keep dying?

rchestras, at least it’s not their product that’s lethal, though it might as well be. With the median age of concertgoers rising, fewer than one in 10 adults reported attending a classical concert in 2008, according to a periodic survey conducted by the National Endowment for the Arts, a 28 percent drop since 1982. The financial state of orchestras today is roughly comparable to that of Blockbuster Video post-Netflix. Ticket sales are dropping; layoffs and bankruptcies abound. In the past two years, the Honolulu, Syracuse, and New Mexico orchestras closed up shop entirely; the Philadelphia Orchestra, long revered as one of the five best in the country, filed for Chapter 11 protection in April.

But there is one group that still likes classical music and, what’s more, pays to hear it performed: Asians. Of Asian-Americans ages 18-24 responding to the same survey, 14 percent reported attending a classical concert in the past year, more than any other demographic in that age group. Despite classical’s deserved reputation as the whitest of genres, Asian attendance rates match or surpass the national average up through the 45- 54 age range. To put it one way, the younger the classical audience gets, the more Asian it becomes.


Photograph by Neilson Barnard/Getty Images for the Swatch GroupAlan Gilbert, son of Japanese and American violinists, conducts the New York Philharmonic.
at 12:00 AM No comments:

Dr. Fuddle And The Gold Baton

High on his cloud-shrouded tower upon a desolate mountaintop stood a royal-looking figure faintly lit by the crescent moon. But a king this was not. His menacing shadow paced, and his black cape billowed, affording an occasional glimpse of a bony wing amidst the folds of red satin lining. He peered out over the mountains and valleys, relishing the sight of darkness over the land.

A small musical sound caught his attention behind him, causing him to turn and step inside his chambers. He stopped at an antique table holding a large carillons á musique, his treasured nineteenth-century music box. But this was no ordinary music box. His bony fingers caressed the ebony roses gilding the mechanical instrument. When he lifted the ornate cover, the box played an eerie metallic tune. A smoke-like mist rose from its mirrored interior. He stared at the waves of sounds forming images before him until a moving picture came into focus:

A young blonde boy with blue eyes walked down a street lined with oak trees. The boy bounded up the steps into his New England Colonial home. The house was alight with music and happiness as the boy's mother played the piano and his young sister listened joyfully. Their reserved father sat in his favorite chair reading the newspaper.

"Isn't that sweet?" mocked the dark one. "But why are you being shown to me?" Two others stood in the shadows behind him viewing the images, not daring to say a word.

The waves of sound contracted. The picture changed. The colonial home had grown dark and the music had stopped. Upstairs in the master bedroom, the boy was sitting in a chair beside his mother’s bed, his head buried in the crook of his arm, and clasping her limp hand in his. In the doorway, the little sister clung to their father.

"Ah, so sad, so sad," said the cloaked one in a whisper, studying the boy with interest. "But again, why you?"

The boy turned as if he could hear the question from far, far away. Without warning, a blazing light radiated from the music box, sending the dark one reeling. He clutched his chest and struggled to close the lid and shut in the light. His voice turned ominous, "Now I see...I see... You are the one I must watch out for."

Email ThisBlogThis!Share to TwitterShare to FacebookShare to Pinterest
Labels: Dr. Fuddle and the Gold Baton, excerpt