How to Make Music With Your Eyes 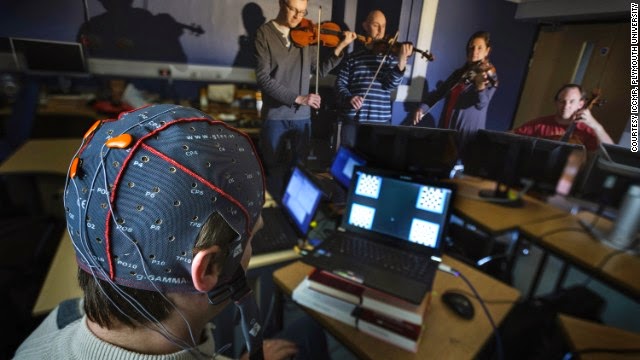 Ever since musician Eduardo Miranda met a patient with locked in syndrome 11 years ago, he has been on a mission to create a way for the paralyzed to make music.

His latest invention is the brain computer music interface (BCMI) which allows people to create music using just their eyes.

By connecting electrodes to the back of the head, the system can tell where you're looking by monitoring brain activity. Flashing icons representing different snippets of music appear on screen and you can make a selection, just by staring at one.

In real time, a musician plays a score generated from the user's selections.

"Our brain is producing electricity all the time," says Miranda, head of the Interdisciplinary Centre for Computer Music Research at Plymouth University.

"We can detect up to eight different frequencies at the moment," explains Eduardo Miranda who is helped by a team of doctoral students and research assistants at his lab.

"My latest composition is for a string quartet. It's an interaction between eight people, four of them generating music and the others playing the music as its being generated.

"The score for the quartet is a computer monitor rather than sheet music so the musicians have to be quite skilled and perform the piece as it's generated."

Speaking of his inspiration for the project, Miranda says: "I wanted to create something to enable people with severe disabilities to make music. I was struck by an encounter I had once with a man who had had a stroke and was paralyzed completely from the neck down.

"That had a profound impact on me and I thought, as a musician, how I could provide a voice for him -- that's where this research began."

He adds: "A few years ago I tested a prototype with a paralyzed patient in a hospital in London he was able to play music by looking as these icons. The nurses and carers there told me that one of the things that these patients really miss is interaction with other people, not with machines. That's how this system was created."

Beethoven's Heart Problems May Have Played Out In His Music


Ludwig van Beethoven (1770-1827), German composer. One of the most famous classical music composers, Beethoven's work represents a bridge between Classical and Romantic styles.

Many who listen to Beethoven's masterpieces would describe them as deeply heartfelt -- and according to new research, this description may be surprisingly apt.

The unusual rhythms found in some of Beethoven's most iconic works may be linked to the heart condition cardiac arrhythmia, which he is suspected to have had, research from the University of Michigan and University of Washington suggests.

In a new paper published in the journal Perspectives in Biology and Medicine, the researchers -- a cardiologist, a medical historian and a musicologist -- investigated the link between the German composer's likely heart condition and his music.

"We started thinking about the ways that somebody's physical illnesses and physical body could manifest in the music they were making," one of the study's co-authors, Dr. Joel Howell, a medical historian and professor of Internal Medicine at the University of Michigan, told The Huffington Post.

The researchers examined the rhythmic patterns of a number of Beethoven's compositions for clues of this condition, and indeed found that the rhythms of certain sections of his famous works reflect the irregular rhythms of cardiac arrhythmia.

“When your heart beats irregularly from heart disease, it does so in some predictable patterns," Howell said in a written statement. "We think we hear some of those same patterns in his music.”

Cardiac arrhythmia can cause the heart to beat too slow, too fast or with an irregular beat. The researchers found that unexpected changes of pace and keys -- such as the intense final movement “Cavatina” in Beethoven’s String Quartet in B-flat Major, Opus 130 -- appeared to match these patterns. Arrhythmic patterns were also detected in iconic pieces like the Piano Sonata in A-flat major, Opus 110.

Historians and physicians have substantial inferential evidence to suggest that Beethoven suffered from heart disease, in addition to a host of other maladies, including irritable bowel syndrome and syphilis. Many of the maladies Beethoven was known to suffer from have been found to contribute to an irregular heartbeat, Howell explained.

According to the paper's authors, Beethoven's deafness could have made him even more sensitive to the rhythm of his own heartbeat, which is perhaps why it was so influential for his music.

But Beethoven isn't the only famous artist who may have had a medical condition that deeply affected his work. Claude Monet experienced vision problems and was diagnosed with cataracts in the later years of his life. Around the age of 65, he began experiencing changes in his perception of color -- and at this time, his paintings shifted towards muddier colors. After he was diagnosed with cataracts at age 72, Monet's work became noticeably more abstract.

"The synergy between our minds and our bodies shapes how we experience the world," Howell said in the statement. "This is especially apparent in the world of arts and music, which reflects so much of people's innermost experiences." 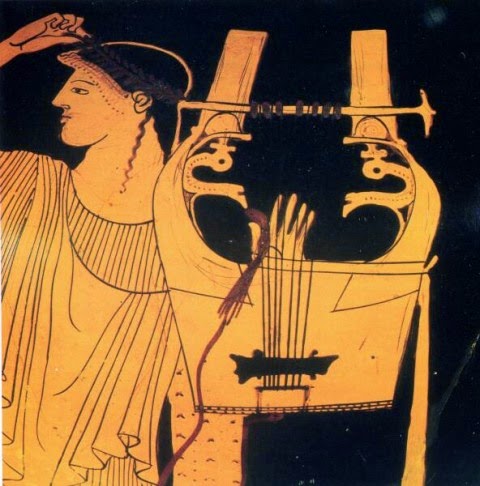 Between 750 BC and 400 BC, the Ancient Greeks composed songs meant to be accompanied by the lyre, reed-pipes, and various percussion instruments. More than 2,000 years later, modern scholars have finally figured out how to reconstruct and perform these songs with (it’s claimed) 100% accuracy.

Writing on the BBC web site, Armand D’Angour,  a musician and tutor in classics at Oxford University, notes:

[Ancient Greek] instruments are known from descriptions, paintings and archaeological remains, which allow us to establish the timbres and range of pitches they produced.

And now, new revelations about ancient Greek music have emerged from a few dozen ancient documents inscribed with a vocal notation devised around 450 BC, consisting of alphabetic letters and signs placed above the vowels of the Greek words.

The Greeks had worked out the mathematical ratios of musical intervals – an octave is 2:1, a fifth 3:2, a fourth 4:3, and so on.

The notation gives an accurate indication of relative pitch.

So what did Greek music sound like? Below you can listen to David Creese, a classicist from the University of Newcastle, playing “an ancient Greek song taken from stone inscriptions constructed on an eight-string ‘canon’ (a zither-like instrument) with movable bridges. “The tune is credited to Seikilos,” says Archaeology Magazine.


Hear a Reconstruction That is ‘100% Accurate’