The Composer and his Muse: Johannes Brahms and Soprano Agathe von Siebol 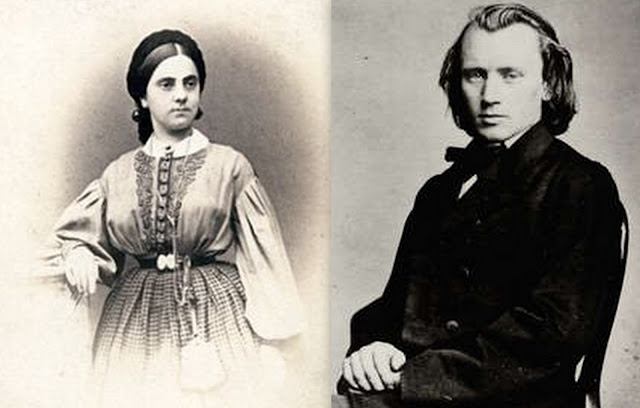 A couple of years before he had started composing the 1st String Sextet, Brahms was still living in his hometown of Hamburg in 1858 when a friend invited him to come check out Göttingen, a college town about 170 miles south. This friend, Julius Otto Grimm, composer, teacher and music director of the local choral society, the Cäcilienverein (Cecelia Club), wrote to him, “If it would please you to have a few good voices lodged in very lovely girls, sing for you, they will take pleasure in being at your disposal. Come quickly!” Odd that Brahms had hesitated, at first.


So, in the midst of working on a serenade originally for a small group of strings and winds, he did so reluctantly, even if it was part of a holiday with Clara Schumann, her five youngest children, her half-brother, composer Woldemar Bargiel and violinist Joseph Joachim. It didn’t, however, take Brahms long to succumb to the charms of the town and especially some of the young ladies in town – one soprano named Agathe von Siebold, in particular.

In addition to having long dark hair, a lush figure, a fondness for practical jokes and a voice that Joachim likened to an Amati violin, Agathe (left) was also studying composition with Julius Grimm who once berated her for some sloppy counterpoint exercises. When Brahms agreed to play a trick on his friend, he wrote out her assignment himself which she duly handed in as her own. Grimm exploded over this “swinish mess” and when Agathe asked “well, what if Johannes had written it,” he said it would be even worse. Here, Brahms had actually screwed it up on purpose, playing a joke on both of them.

At the end of this extended vacation, Brahms returned to Detmold, about 30 miles to the northwest as the crow flies, where he was employed part of the year as a “court musician,” performing with the orchestra there and teaching music to the family of Prince Leopold III. In addition to organizing chamber music concerts, he also conducted a women’s choir for whom he wrote numerous short choral works.

Visiting Göttingen again in 1859, he and Agathe continued their friendship and apparently became secretly engaged. According to his friends, they seemed perfectly happy with each other.

This quote from a memoir Agathe von Siebold

I think I may say that from that time until the present, a golden light has been cast on my life, and that even now, in my late old age, something of the radiance of that unforgettable time has remained.  I loved Johannes Brahms very much, and for a short time, he loved me.

Then he left for two performances of his finally completed D Minor Piano Concerto which was neither a success nor a failure in Hannover but which was frostily received in Leipzig five days later. After a long silence, perhaps three pairs of hands bothered to applaud before the hissing began. Critics called it “banal and horrid.”


By then, returning to see Agathe, Brahms suffered what today would be called “a fear of commitment.” When he wrote to her, "I love you! I must see you again! But I cannot wear fetters! Write me whether I may come back to fold you in my arms, to kiss you, to tell you that I love you!" she responded by breaking off the engagement.

To his friends, Brahms would admit to “playing the scoundrel” to Agathe. Over a decade later, he recalled those days, how he would like to have married but when his music was hissed in the concert hall and so icily received, he realized while this was something he himself could tolerate, returning alone to his room,

“...if, in such moments, I had had to meet the anxious, questioning eyes of a wife with the words ‘another failure’ – I could not have borne that! For a woman may love an artist… ever so much… and if she had wanted to comfort me – a wife to pity her husband for his lack of success – ach! I can’t stand to think what a hell that would have been.”

During the first months in Göttingen , he wrote several songs for Agathe to sing, many of them using a musical motif based on her name spelled out in certain available notes.

In the months following his break-up with Agathe, Brahms composed more songs, still occasionally employing the “Agathe Motive” but setting it to words about parting and lost love.

Brahms would use this “Agathe Motive” again in the 2nd String Sextet which he completed a few years after he and Agathe von Siebold parted ways.

Moving ahead a few years, Brahms had completed two new piano quartets and three versions of his Piano Quintet, before writing to his Göttingen friend Julius Grimm once again, asking how things were “in all the houses where one used to go so happily… of that house and gate – ” which he didn’t need to explain was the house where Agathe von Siebold lived with her father.

Grimm told him “the old Professor had died three years ago” and Agathe had taken a job the past year as a governess in Ireland where she teaches music and German to the daughters of a rich young English family. She had to get away, he said, from “the shadowed pages of her life… what a gloomy lot is that of a girl alone.”

Brahms returned to Göttingen and stood by that ruined gate, looking at the empty house (such images typical of the lovelorn poetry of the Romantic Age). In September, he composed the devastated and exalted songs of Op. 32 which included the lines “I would like to stop living, to perish instantly, and yet I would like to live for you, with you, and never die.”


That same month, he began the first movement of the 2nd String Sextet. The second movement was based on a Baroque-like gavotte he’d written (part of a collection of tongue-in-cheek dances in the early-1850s) contrasting with a jocose middle section. The original sketch of the slow movement’s variations was written in 1855 and the overall sound is basically “wandering, empty, tragic.” The finale sounds like it might be a proper scherzo with a warm contrasting section with a bit of a dance to it: perhaps a “last dance, at the end of an affair,” as Swafford describes it.

The opening is a gem of a motive – This is Agathe’s Motive - and at its most obvious, climactic point, it is repeated five times. Yet this time, there is another note inserted within the motive – a D (see above) – which helps spell out the word “adé” or “Adieux, Farewell” in the inner voices. One could even sing "Agathe, adé" to this fragment of a melody.

Brahms is certainly saying farewell to Agathe, taking his leave, musically if not emotionally. Yet in the very first song he wrote for her – Op.14 No. 1 of 1858 – this “adé” motive appears when the night-watchman sounds his horn as the lovers part.

We may think of this as purely abstract music with no literary allusions or suggestions of telling a story, the sort of thing Liszt and the New German School espoused. But even Brahms must have had something on his mind, here, when he was writing this – a young girl who used to sing his songs for him and with whom he once contemplated marriage.