“If Viotti is the father of modern violin playing, surely Tartini is its godfather.” 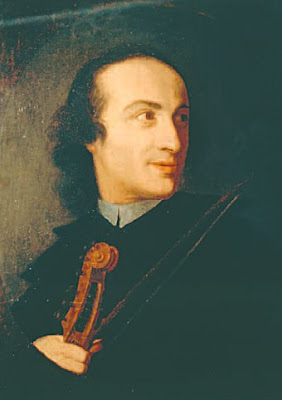 Tartini was born in Pirano, a town on the peninsula of Istria, in the Republic of Venice (now in Slovenia) to Gianantonio – native of Florence – and Caterina Zangrando, a descendant of one of the oldest aristocratic Piranese families.

It appears Tartini's parents intended him to become a Franciscan friar and, in this way, he received basic musical training. He studied law at the University of Padua, where he became skilled at fencing.

A secret marriage to Elizabetta Premazore, the niece of the Bishop of Padua, in 1710 when he was 18 necessitated his flight from the city some three years later when the marriage was discovered. He eventually found refuge at Assisi where there was a friar at the monastery with some family connections to him. In Assisi, he began to study the violin with Father Boemo—who was most likely the Czech musician Bohuslav Cernohorsky—and played in the convent orchestra. Cernohorsky was later an organist at St. Anthony’s in Padua and Tartini’s colleague. After about two years in Assisi, Tartini was recognized by some visitors from Padua while performing (a curtain blew aside during a performance and revealed him, went the tale). His seriousness and musical ability led to the successful outcome of reconciliation with the Bishop, and he and his wife moved to Venice in approximately 1715 or 1716.

Tartini’s playing was said to be remarkable for its combination of technical and poetic qualities. He was regarded with universal pride by the inhabitants of Padua. He was serious, contemplative, of a scientific turn of mind, and was esteemed as a philosopher and a great musician. He was proclaimed by the Italians “il Maestro delle Nazioni,” the finest musician in the world, while the French termed him “le legislateur de l’archet,” the lawgiver of the bow.

Tartini was the first known owner of a violin made by Antonio Stradivari in 1715, which Tartini bestowed upon his student Salvini, who in turn gave it to the Polish composer and virtuoso violinist Karol Lipiński upon hearing him perform: the instrument is thus known as the Lipinski Stradivarius. Tartini also owned and played the Antonio Stradivarius violin ex-Vogelweith from 1711.

In 1726, Tartini started a violin school which attracted students from all over Europe. Gradually, Tartini became more interested in the theory of harmony and acoustics, and from 1750 to the end of his life he published various treatises.