The Composer and His Muse: Giuseppe Verdi, Giuseppina Strepponiuse and Tereza Stolzová


Clelia Maria Josepha Strepponi was an operatic soprano of great renown and the second wife of composer Giuseppe Verdi.

She is often credited with having contributed to Verdi's first successes, starring in a number of his early operas, including the role of Abigaille in the world premiere of Nabucco in 1842. A highly gifted singer, Strepponi excelled in the bel canto repertoire. Both her personal and professional life was complicated by overwork, by at least three known pregnancies, and by her vocal deterioration which caused her to retire from the stage by the age of 31, in 1846 when she moved to Paris to become a singing teacher.

She came out of her stage retirement briefly for one last opera appearance at the Comédie-Italienne which was not well received. Verdi, who was in England for the premiere of his opera I masnadieri in July 1847, returned via Paris and the two began a romantic relationship, with the composer remaining there for two years.

The couple returned to Italy by July 1849 and began living together in Busseto, Verdi's hometown where they first lived at the Palazzo Orlandi. The reaction of many of the people of Busseto towards Giuseppina, a woman of the theatre living openly with the composer in an unmarried state concerned Verdi, and as such, she was shunned in the town and at church.While Verdi could "treat the Bussetani with contempt Giuseppina, in the next few years, suffered greatly."

From May 1851 they moved to Verdi's house in Sant'Agata just outside the town, which today is known as the Villa Verdi.

Although unmarried until 1859, the marriage was a happy one and the couple remained together for the rest of their lives and she supported her husband in his career in many ways, her knowledge of French and English being especially useful. It is even thought that it was she who translated the original play by Antonio García Gutiérrez, El trovador of 1836, which became Il trovatore in 1853.


Having finally tied the knot, Peppe Verdi and Peppina Strepponi enjoyed an extended period of matrimonial peace. Whenever possible, they spent quality time at the Villa Verdi, located in the village of Sant’Agata.  As his fame and fortune grew, Verdi invested a considerable amount of money into expanding his estate, which eventually included various farms, extended forests and fisheries. When Peppe was once asked which of his operas he liked best, he replied “Rigoletto and Aida, because they bring in the money!”


In other respects, she offered him much advice and, as Walker recalls from her account of being curled up in an armchair nearby, all the while offering comments and criticism while Verdi was composing, he speculates that "she must have sung many of these world-famous melodies for the first time from the manuscript sketches." At one point he took her advice not to have to compose on order by a certain date, but to find a suitable subject, then compose the music at his own convenience, and then find a suitable venue and suitable singers, and he so informed Corticelli, the theatrical agent from Bologna.

Verdi remained highly active in his musical career. In 1869 he supervised rehearsals for revisions to his opera La forza del destino (The Force of Destiny), which included a new overture and an alternate ending. It might have been fate and not necessarily destiny that the character of “Leonora” was sung by Teresa Stolz.  Read more

Born Tereza Stolzová in the Bohemian town of Kostelec, she became the “Verdian dramatic soprano par excellence, powerful, passionate in utterance, but dignified in manner and secure in tone and control.” Between 1865 and 1877, Teresa appeared in a number of significant premieres, including the first European performance of Aida in 1872. In 1869 she was the mistress of the conductor and composer Angelo Mariani. At that time, Mariani was also good friends with Peppe Verdi and Teresa enjoyed the attention of both men, although presumably not at the same time. Verdi kept a suite in the Grand Hotel in Milan, just minutes from Teresa’s home, and the relationship was frequently and regularly consummated.

Meanwhile, Peppina Verdi did not have to rely on woman’s intuition at all, as her husband Peppe simply forced her to accept Teresa Stolz as part of the domestic arrangement. He certainly wished for Peppina to be happy on his behalf, because after all, Teresa had brought happiness into his life. He once remarked to a friend, “how ridiculous that Peppina is jealous of Teresa! Every time she visits me, she brings vitality and big smiles!” Since Peppina was not inclined to confront the situation head on, she initially adopted a “wait and see” attitude in hopes that her rival would go away sooner rather than later.  For a while thing stayed relatively calm, and the uneasy threesome even went on summer holiday together. Peppina even suggested that Teresa buys a little villa near their home in Sant’Agata. That way, the affair between Teresa and Peppe could at least be carried on discreetly, and Peppina could keep a close eye on things.

Things came to a head upon their return to Sant’Agata, however. Peppina ordered Peppe to send Teresea away, “let’s end this once and for all,” she wrote. “I think sometimes I, your wife am living à trios. I have the right at least to your respect, if not to your caresses.” Verdi heatedly responded by threatening to kill himself if Teresa left. In the end, it was Teresa who made the decision to leave, aided undoubtedly by a lucrative engagement in St. Petersburg. Twenty years past, and after Peppina Strepponi’s death in 1897 Teresa Stolz once more became Verdi’s constant companion. Unlike Aida, however, Verdi was buried next to his wife, and not his lover.  Read more

In those years, Strepponi frequently suffered from stomach problems and arthritis and during her last year of life she could barely move from her bed. In the autumn of 1897, when the couple was once again preparing to spend the winter in Genoa in a more salubrious climate with proximity to the sea, Verdi made the decision to stay in Sant'Agata because his wife was bedridden. Giuseppina Strepponi died after a long illness on 14 November that year at Sant'Agata, due to pneumonia. She was initially buried in Milan. With the death of Giuseppina, Verdi became a widower for the second time, and was once again tormented by the pain of losing one of the most important figures in his life.

When Verdi died in 1901 he left instructions in his will to be buried next to Giuseppina, but he was buried in the main cemetery of Milan. The desire to see the couple together in the afterlife eventually led on 26 February 1901 to the transfer of both of their the bodies to the oratory of the Casa di Riposo in Milan, the retirement home for musicians which Verdi had created. Arturo Toscanini directed a choir of 900 singers in the famous Va, pensiero from Nabucco. 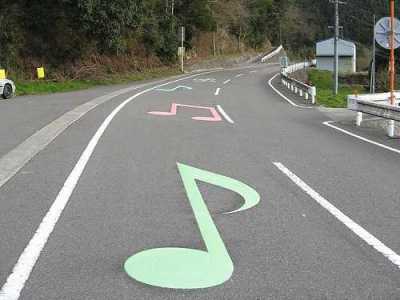 It took a certain Mr. Shinoda, working with the Hokkaido Industrial Research Institute, to apply the sonic resonance theory in a unique way. Shinoda discovered that by varying the spacing between the cut grooves, the pitch of the sound would vary. It's somewhat similar to an old-fashioned music box that uses metal times and posts to play a tune when set in motion against one another. It might not be as soothing to the ear as your favorite CD, but considering it's being played by the "Goodyear Orchestra", it's really not all that bad!

Melody Roads are located in the provinces of Hokkaido, Wakayama and Gunma, and are well-marked by roadside signs and colorful painted "notes" on the roadbed itself. Drivers should be aware that the music, as it were, is ideally heard when drivers maintain a speed of just 28 mph - on a highway, yet.