The Composer and his Muse: Igor Stravinsky and Coco Chanel

A Russian-born composer, pianist, and conductor Stravinsky is widely considered one of the most important and influential composers of the 20th century. 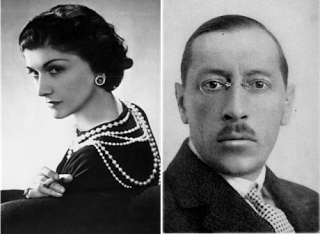 Written for the 1910 Paris season of Sergei Diaghilev's Ballets Russes, with choreography by Michel Fokine Firebird has historic significance not only as Stravinsky's breakthrough piece, but also as the beginning of the collaboration between Diaghilev and Stravinsky that would also produce Petrushka, The Rite of Spring, Pulcinella and others.

The alleged affair between eminent Russian composer Igor Stravinsky and fashion design-icon Coco Chanel is shrouded in mystery. The relationship is claimed to have taken place while Stravinsky was still married to his second wife Vera, and she adamantly denied the credibility of Chanel’s assertions in her biography (written by Paul Morand) that she and Stravinsky were lovers.

The two definitely met, introduced by Ballet Russes impresario Sergei Diaghilev in 1920. Indeed Chanel invited the whole Stravinsky family to stay with her in Paris for eight months, and it is also claimed that Chanel personally underwrote the 1920 Ballet Russes production of The Rite of Spring with a donation of 300,000 francs. 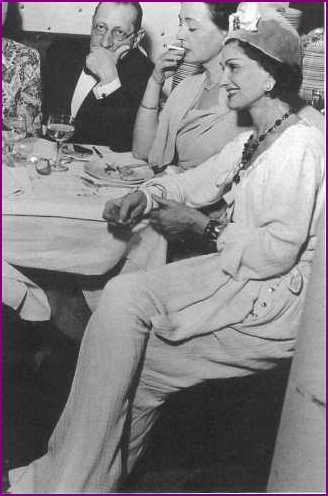 While the truth of their relationship remains an enigma, it is nonetheless an exciting thought that two such influential and iconic artists may have shared a secret tryst. 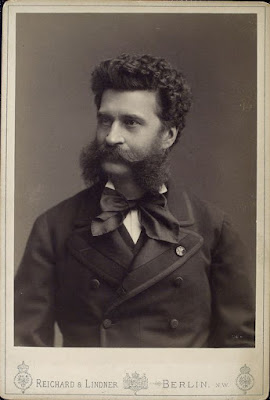 Johann Strauss was an Austrian composer of light music, particularly dance music and operettas. He composed over 500 waltzes, polkas, quadrilles, and other types of dance music, as well as several operettas and a ballet. In his lifetime, he was known as "The Waltz King", and was largely then responsible for the popularity of the waltz in Vienna during the 19th century.


Some of Johann Strauss' most famous works include "The Blue Danube", "Kaiser-Walzer" (Emperor Waltz), "Tales from the Vienna Woods", and the "Tritsch-Tratsch-Polka". Among his operettas, Die Fledermaus and Der Zigeunerbaron are the best known.


Johannes Brahms was a personal friend of Strauss; the latter dedicated his waltz "Seid umschlungen, Millionen!" ("Be Embraced, You Millions!"), Op. 443, to him.

A story is told in biographies of both men that Strauss's wife Adele approached Brahms with a customary request that he autograph her fan. It was usual for the composer to inscribe a few measures of his best-known music, and then sign his name. Brahms, however, inscribed a few measures from the "Blue Danube", and then wrote beneath it: "Unfortunately, NOT by Johannes Brahms. 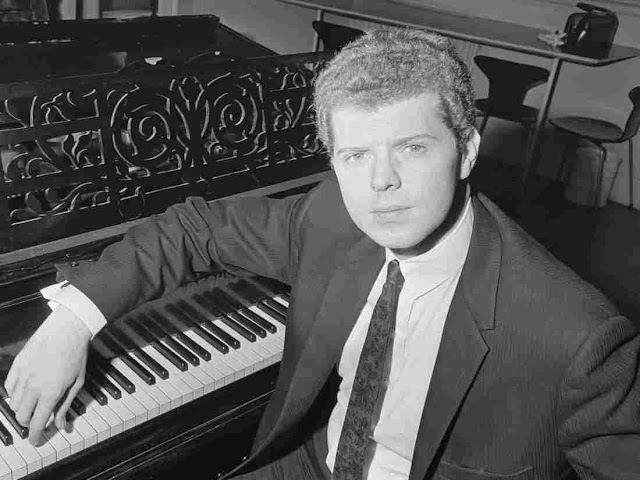 Van Cliburn is one of the most celebrated pianist this country has produced. Though he will always be remembered as the winner of the first Tchaikovsky International Piano Competition and remains the only American ever to have won it.

His mother, an accomplished pianist and piano teacher, discovered him playing at age three and mimicking one of her students. She arranged for him to start taking lessons. He developed a rich, round tone and a singing voice-like phrasing, having been taught from the start to sing each piece.

Tchaikovsky Piano Concerto No.1Played by Van Cliburn in Moscow, 1962. He was accompanied by Kirill Kondrashin.


Mr. Cliburn, a Texan, was a lanky 23-year-old when he clinched the gold medal in the inaugural year of the Tchaikovsky competition, and the feat, in Moscow, was viewed as an American triumph over the Soviet Union at the height of the cold war. He became a cultural celebrity of pop-star dimensions and brought overdue attention to the musical assets of his native land.

When Mr. Cliburn returned to New York, he was given a ticker-tape parade in Lower Manhattan, which offered the sight of about 100,000 people lining the streets and cheering a classical musician. In a ceremony at City Hall, Mayor Robert F. Wagner proclaimed that Mr. Cliburn’s accomplishment was “a dramatic testimonial to American culture” and that “with his two hands, Van Cliburn struck a chord which has resounded around the world, raising our prestige with artists and music lovers everywhere.”

In his 1999 memoir, “The Times of My Life,” Mr. Frankel recalled his coverage of Mr. Cliburn’s triumph in Moscow: “The Soviet public celebrated Cliburn not only for his artistry but for his nationality; affection for him was a safe expression of affection for America. My account of his rapturous reception landed on the front page of The Times two days before the pianist was crowned the contest winner because I posed the obvious question of whether the Soviet authorities would let an American beat out the finest Russian contestants. We now know that Khrushchev” — Nikita S. Khrushchev, the Soviet premier — “personally approved Cliburn’s victory, making Van a hero at home and a symbol of a new maturity in relations between the two societies.”

Mr. Cliburn was a naturally gifted pianist whose enormous hands spanned 12 notes each. He developed a commanding technique, cultivated an exceptionally warm tone and manifested solid musical instincts. At its best, his playing had a surging Romantic fervor, but leavened by an unsentimental restraint that seemed peculiarly American. The towering Russian pianist Sviatoslav Richter, a juror for the competition, described Mr. Cliburn as a genius — a word, he added, “I do not use lightly about performers.”

But if the Tchaikovsky competition represented Mr. Cliburn’s breakthrough, it also turned out to be his undoing. Relying inordinately on his keen musical instincts, he was not an especially probing artist, and his growth was stalled by his early success. Audiences everywhere wanted to hear him in his prizewinning pieces, the Tchaikovsky First Concerto and the Rachmaninoff Third. Every American town with a community concert series wanted him to come play a recital.

“When I won the Tchaikovsky I was only 23, and everyone talked about that,” Mr. Cliburn said in 2008. “But I felt like I had been at this thing for 20 years already. It was thrilling to be wanted. But it was pressure, too.”

His subsequent explorations of wider repertory grew increasingly insecure. During the 1960s he played less and less. By 1978 he had retired from the concert stage; he returned in 1989, but performed rarely. Ultimately, his promise and potential were never fulfilled. But the extent of his talent was apparent early on.

The Van Cliburn International Piano Competition takes place every four years and holds the most extensive audition screening tour by judges of any international contest. The winner of the Cliburn gets three years of professional management, international bookings and publicity. This year's winner is Yekwon Sunwoo of South Korea. Sunwoo, trained at the Curtis Institute of Music and the Juilliard School.


To promote music-making as a part of everyday life, the Cliburn established the International Piano Competition for Outstanding Amateurs in 1999. Now a quadrennial forum for non-professional musicians, the competition is open to pianists age 35 and older who do not derive their principal source of income through piano performance or instruction. 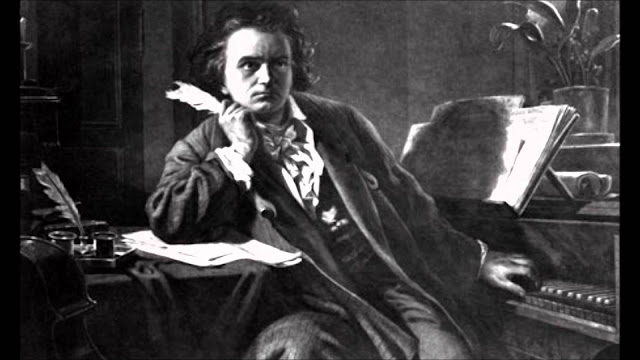 In the summer of 1812, a young aspiring pianist named Emilie sent her hero a beautiful hand-embroidered pocketbook to express her admiration for his artistic genius. Touched by the gesture, 41-year-old Beethoven wrote back, offering some simple yet profound words of encouragement and advice on the creative life — an exquisite micro-manifesto for what it means to be an artist and what art demands of those who make it.


This was Beethoven’s response which was included in the Michael Hamburger's documentary book Beethoven: Letters, Journals and Conversations.

Do not only practice art, but get at the very heart of it; this it deserves, for only art and science raise men to the God-head. If, my dear Emilie, you at any time wish to know something, write without hesitation to me. The true artist is not proud, he unfortunately sees that art has no limits; he feels darkly how far he is from the goal; and though he may be admired by others, he is sad not to have reached that point to which his better genius only appears as a distant, guiding sun.

I would, perhaps, rather come to you and your people, than to many rich folk who display inward poverty. If one day I should come to [your town], I will come to you, to your house; I know no other excellencies in man than those which causes him to rank among better men; where I find this, there is my home.

If you wish, dear Emilie, to write to me, only address straight here where I shall be still for the next four weeks, or to Vienna; it is all one. Look upon me as your friend, and as the friend of your family.