The Composer and his Muse: Franz Schubert and Therese Grob

Therese Grob was the first love of the composer Franz Schubert.

Nothing stokes the fire of adolescence and the enormous physical and psychological changes that occur during the teenage years quite like the teenage girl and/or boy next door. Franz Schubert spent his formative years in Lichtental, the ninth district in Vienna, and the girl next door was Therese Grob. She was 18 and Schubert only a year older. Her parents owned a small silk factory not far from the Schubert household, and young Franz was a frequent visitor to the house. Therese was described by one of the first Schubert biographers as “by no means a beauty, but well-built, rather plump and with a fresh, childlike round face and a lovely soprano voice.” There can be no doubt that Schubert was infatuated with Therese, and the composer’s friend Anselm Hüttenbrenner recalled a conversation in which Schubert had said, “I loved someone very dearly and she loved me too. For three years she hoped I would marry her; but I could not find a position which would have provided for us both.”

Therese  had a beautiful soprano voice. Schubert’s first complete Mass setting was composed entirely with Therese in mind, and she sang the soprano solo at the premiere of the Mass in F, D. 105 at the Lichtental parish church, while Schubert conducted the performance.

In addition, Schubert compiled 17 songs at various times during 1816, which subsequently became known as the “Therese Grob Album.” The term “album” is somewhat misleading, as the collection does not describe the chronological order of composition. Therese later told Schubert’s first biographer, that “Süsse, heilige Natur,” (An die Natur), which appears as the third song in the collection, was the first song she ever saw.

Three of the songs were expressly written for Therese, as no other manuscript copies exist. The remaining 14 are copies that Schubert made for Therese; however, he also made copies for his other friends.

Therese later suggested that she had no idea that Schubert was in love with her, and she married the master baker Johann Bergmann at the Lichtental church in 1820. Schubert also composed music for Therese’s brother Heinrich, two years his junior. Heinrich was a talented pianist and violinist, and the violin sonatas op. 137, published posthumously, were almost certainly composed for Heinrich Grob.

Angelica sang "The Hills are Alive" from the Sound of Music to the piano accompaniment by Dr. Warren Woodruff.


Performance produced and directed by Lynn Stallings Of the Atlanta Workshop Players and Dr. Warren Woodruff, inspired by Dr. Fuddle and The Gold Baton.


No opera star has shone brighter in the public consciousness of the last half-century than soprano Maria Callas. Born in New York in 1923 to a couple of struggling immigrants who had just arrived from Greece a few months before her birth, Callas — who throughout her life bore an undeniable feeling for music, a pronounced taste for luxury, and an iron will — climbed to the pinnacle of international fame.

Much of that notoriety had nothing to do with her artistic life. Her long affair with the world's then-wealthiest man, Aristotle Onassis — and his eventual marriage to Jacqueline Kennedy instead of to her — guaranteed that she was a gossip-column staple. Her epic battles with other singers and opera impresarios made for prime publicity fodder, too, and included a feud with the Metropolitan Opera's then-general manager, Rudolf Bing, that left her barred from the Met, and an episode in which she was served a lawsuit backstage in Chicago that became the catalyst for an iconic photo of a furious Callas.

But all of that was surface noise. Long after the newspaper headlines have faded away, her art remains. None of the high-society chatter, nor her high fashion sense, nor the contours of her deeply unhappy personal life, nor her mercurial personality was what made Callas La Divina, "The Divine One." Onstage, she possessed one of the greatest voices of all time. She was an indelible presence whose artistry made her the icon and envy of performers across many genres. (From its inception, "Turning the Tables" — a readdressing of the pop music canon — was not meant to include classical musicians. But such an accounting is long overdue in its own right, particularly considering the extent to which female classical artists are still so routinely denigrated, slighted, dismissed or rendered invisible.)

Vocally, Callas was a chameleon. At the beginning of her career, her richly textured voice was deemed right for weighty, dark-hued Wagner, but she could also dispatch fizzy, frilly roulades in Rossini's Barber of Seville, and take her listeners to the stratosphere in Verdi's Aida.


Although she never sang the role on stage, her recordings as the coy, sexually irrepressible lead in Bizet's Carmen set a standard — as she also did in another, far different signature role when she played the tormented high priestess and mother of two in Bellini's Norma.


Her dedication to the bel canto operas of composers like Bellini and Donizetti also paved a career path way for singers, including the likes of Beverly Sills and Marilyn Horne, to excel in that formerly neglected repertoire. A nickname like "The Divine One" might imply that Callas possessed a voice that was ethereal and sweet, perhaps more like that of a choirboy than of a grown woman, and certainly a technically perfect one. That was not Callas at all. What made Maria Callas La Divina is how she fought, every step of the way.


"Mine is a big destiny," she once told an interviewer. Her divinity was like that of a classical Greek goddess: rife with insecurities, trauma, jealousy and outsized aspirations. And like the deities of myth, she didn't always win her battles. Callas' performances were a high-wire act: Either she thrilled audiences or exasperated them, with little middle ground. She was no stranger to hearing boos, or to having vegetables thrown at her. And she stood on even less sure technical terrain as her voice declined fast and early — while she was still in her forties — before her untimely death at age 53.

But the ultimate goal of Callas' performances was not obtaining plush vocal perfection or a simpering prettiness: it was glory. That singular voice was a penetrating, ferocious weapon that she wielded to extract maximum emotional truth from the roles she played, no matter what the cost. She shaped words and lines with great care, lending dramatic form and heft to even the silliest operatic frippery. She expected her audience to listen with as much intelligence and focus as she put out. Callas was a compelling, magnetic, fiery, impassioned presence — and she gave her characters immortality.

PLAY ALONG and VOTE for Our Favorite Angelica Hale on America's Got Talent Beginning August 15th!! 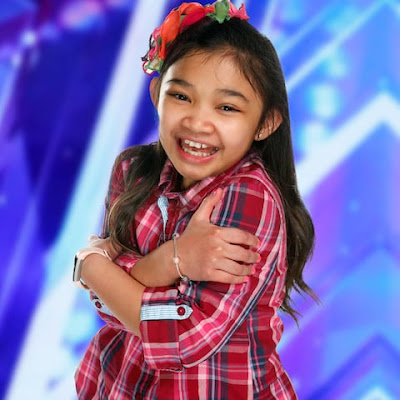 The live shows are here for America’s Got Talent 2017, which means that audience and viewer participation is key in keeping your favorite acts in the competition. If you want our favorite Angelica Hale to stay on the show, then you need to vote on line!

NBC has officially launched its new AGT App, which is available via Google Play and the Apple Store. With the app, you can vote along with the show and even customize your buzzer sounds with voices from the judges. Viewers who use the app can actually see real-time results totaled from the at-home voting activity.

Season 12 premiered to the highest viewership in six years and continues to be the No. 1 show of the summer. Many of this season's acts have already surpassed 100 million views on their audition videos and the numbers continue to grow.

Our favorite, Angelica Hale, is a young singer from Atlanta. At just two years old, Hale started singing along to songs on the radio, and began taking professional vocal lessons at the age of five. When she was four years old, Hale developed a severe bacterial pneumonia that nearly took her life, causing her to go septic and have multiple organ failures, including kidney failure and permanent scarring in her right lung. She remained in kidney failure for more than a year, but in 2013 received a life-saving kidney transplant from her mother. Today Hale performs at events and fundraisers all around the country in support of Children's Miracle Network Hospitals and Children's Healthcare of Atlanta, which is the hospital that saved her life.