The Composer and His Muse: Beethoven, Julie Guicciardi and Moonlight Sonata 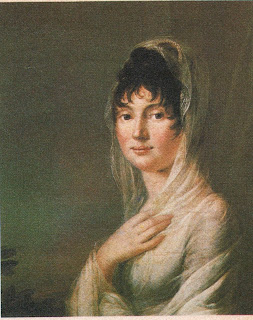 Julie Guicciardi, as she was named by her family, was born in Przemysl, Galicia in 1782. She arrived in Vienna with her parents from Trieste in June 1800, and her beauty caused her to be noticed by high society.

Beethoven became acquainted with Guicciardi through the Brunsvik family. In late 1801, he became Guicciardi's piano teacher, and apparently became infatuated with her. She is probably the "enchanting girl", about whom he wrote on 16 November 1801 to his friend Franz Gerhard Wegeler: "My life is once more a little more pleasant, I'm out and about again, among people – you can hardly believe how desolate, how sad my life has been since these last two years; this change was caused by a sweet, enchanting girl, who loves me and whom I love. After two years, I am again enjoying some moments of bliss, and it is the first time that – I feel that marriage could make me happy, but unfortunately she is not of my station – and now – I certainly could not marry now."

In 1852, four years before her death, Julie told the scholar Otto Jahn that he had originally given her the manuscript of the Rondo in G Major, Opus 51, no. 2, but asked her to return it because he needed to dedicate that work to Countess Lichnowsky.

Ultimately Beethoven dedicated what has become the most famous piano sonata ever composed to Julie, thereby assuring her a place in music history. He simply called it Piano Sonata No. 14, and it wasn’t given its poetic nickname until 1832, five years after Beethoven’s death. German poet Ludwig Rellstab, (Rellstab had considerable influence as a music critic), said the first movement sounded like moonlight shining upon Lake Lucerne, and the name stuck.

In 1823, Beethoven confessed to his then-secretary and later biographer Anton Schindler, that he was indeed in love with her at the time.

It is certain that Beethoven proposed marriage to Giulietta, and that she was inclined to accept. One of her parents was in favor of the match. But the other - probably her father - forbade her to marry a man "without rank, fortune or permanent engagement; a man, too, of character and temperament so peculiar, and afflicted with the incipient stages of an infirmity which, if not arrested and cured, must deprive him of all hope of obtaining any high and remunerative official appointment and at length compel him to abandon his career as the great pianoforte virtuoso". (Thayer's Life of Beethoven)

Giulietta married instead Count Wenzel Robert Gallenberg, a prolific composer of ballet and occasional music, on 3rd November 1803. The newly married couple left for Italy and were in Naples in the spring of 1806 - there Gallenberg composed music for the fête celebrating Joseph Bonaparte's assumption of the crown of the two Sicilies. In late 1821 he was made an associate director of the Royal Imperial Opera in Vienna, and the couple returned to Vienna, but there is no evidence that Beethoven renewed his friendship with his old flame.